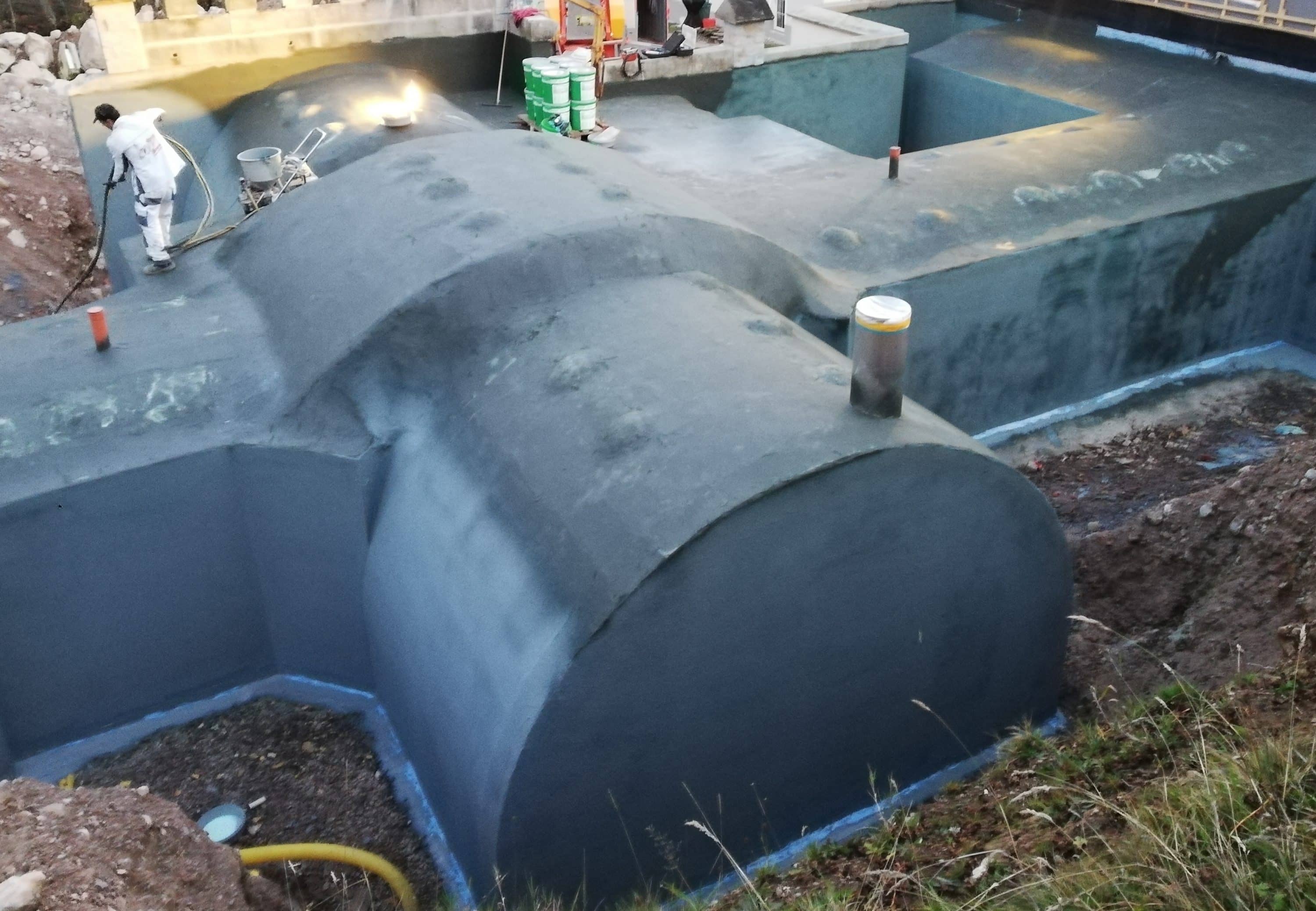 A private builder in the southern Black Forest had his own vaulted cellar built for brewing beer. A central aspect in this context was to protect the vault from moisture and moisture damage in the long term. Therefore, the reactive waterproofing Botament RD 2 The Green 1 was used. This was installed in conjunction with various system components such as the GS98 glass fibre fabric and the PB portal sealing tape from Botament. In winter weather conditions and low temperatures, the waterproofing material impressed above all with its speedy, safe and simple application.

When there were no refrigerators, vaulted cellars were a great way to store and preserve food for an extended period of time. A characteristic feature of the buildings is always a curved ceiling – for example in the form of a barrel or cap vault. Due to the location underground and the use of bricks as a building material, the indoor climate and temperature are particularly favourable here. The cool, moist air provides ideal storage conditions – for example for storing fruit and vegetables, for maturing cheese or for storing and maturing wines.

Protection against moisture and humidity

A builder in the southern Black Forest has now realised his dream of a private vaulted cellar. The structure was built into the hillside and is connected to the residential building by an elevator. The vault is used on the one hand as a wellness area. On the other hand, the owner would like to brew his own beer here in the future. Moisture protection played an important role in the realization of the basement in the ground. To protect the interior from surrounding wetness and moisture damage, a professional sealant was applied from the outside. For this purpose, the project participants opted for a system from Botament. With RD 2 The Green 1, a two-component and bitumen-free reactive sealant was chosen, which in particular has fast drying times.

The plasterer and stuccoer Udo Booz from Schluchsee in Baden-Württemberg was commissioned with the sealing work on the vault. In the first step, the workers prepared the substrate and provided the shell with a cement plaster. Then the craft team applied a primer. This was followed by three layers of reactive waterproofing RD 2 The Green 1. The bottom layer was a scratch coat. For this purpose, the two-component material first had to be mixed. The powder is added to the liquid component and mechanically stirred for about two minutes. Then the waterproofing material is scraped onto the substrate with the smooth side of a trowel. A fabric filler with RD 2 was then applied to the fully dried scratch filler layer. The white glass silk fabric GS98 from Botament was embedded in it. It serves as reinforcement within the waterproofing and is characterized by alkali resistance and tear resistance. Finally, the applicators applied a finishing coat of RD 2 reactive waterproofing.

Botament RD 2 The Green 1 is characterised in particular by its ease of application – both manually by rolling, brushing or troweling and by mechanical application. Even large areas can be reliably sealed within a very short time. The material is also equipped with an optical drying control. It makes it easier for the processor to recognize when the material is ready for the subsequent execution steps. Thanks to its low layer thickness, the waterproofing material is also very economical and dries quickly. This is economical and guarantees fast construction progress. This was entirely in line with the client’s wishes, who wanted to have the cellar sealed as quickly as possible so that work could continue inside. For the product RD 2 The Green 1, Botament has a European Technical Assessment (ETA) as well as general building authority test certificates in accordance with PG-MDS/FPD and PG-ÜBB. In addition, the product is tested according to DIN EN 14891.

In addition, Botament’s highly elastic and tear-resistant PB portal sealing tape was installed to seal the vaulted cellar to the residential building. It has an adhesive strip for fixing and can be applied particularly quickly and easily. The inner corners were worked on with the transversely elastic and double-sided fleece-laminated system tape SB78 from Botament. In order to protect the walls in contact with the ground from mechanical and dynamic influences, a Botament protection and drainage membrane was also used. It was laid in front of the walls. The studded membrane is not only very resilient, but also ensures that water is reliably drained away, thus protecting the building fabric from moisture and damage. It is tested in this respect in accordance with DIN 4095. In addition, the protective and drainage membrane meets the requirements for a protective layer according to DIN 18533.

Processing in cold and snow

The location of the construction site at an altitude of around 1,000 metres posed a challenge for the construction project. “Since the work took place in October and November, we had problems with the weather in the form of cold, precipitation and snow,” explains Moritz Booz of the plastering and stucco company Udo Booz. The corresponding layer thicknesses had to be achieved in the execution of the respective layers. Also, due to the weather and the associated cold temperatures, the appropriate drying times had to be observed. “The advantage of RD2 reactive waterproofing was that we were able to apply the material without any problems even in difficult weather conditions – for example, in the low temperatures,” explains Booz. The waterproofing is rainproof after only three hours and mechanically loadable after 24 hours. Bonding of insulation or drainage boards is possible after four hours.

A total of 360 square metres of Botament’s reactive waterproofing were installed during the construction project. This corresponds to 96 containers. Thanks to the efficiently applied waterproofing material and the well-coordinated, professional team of Udo Booz, the vaulted cellar was completely waterproofed within the tight schedule.